“Once we name something, you said, we can never see it the same way again. All that is nameable falls away, gets lost, is murdered. You called this the cookie-cutter function of our minds… I argued…for plethora, for kaleidoscopic shifting, for excess. I insisted that words did more than nominate.”[1]

I recently received a text message announcing that two friends had given birth to a baby. They sent a photo: a tan and pink bundle wrapped in fleece. I quickly wrote back and asked for the baby’s name. The photo wasn’t enough. It didn’t matter that these friends live in another country and their newborn may be a toddler before I meet him. I needed a caption to accompany the photo, to turn over in my head, to be prepared to pronounce whenever we next speak on Skype.

Jelena Jureša’s MIRA, Study for a Portrait (2010–2014) traces the weight a name carries against the pull of history. Through multiple forms—a two-channel video installation, a series of photographs, lithographs, and a book—Jureša conveys the biography of her protagonist in starts and stops. Mira’s name, both its meanings and its sound, provides punctuation. Naming provides one method for measuring absence, as in my relationship to my friends’ baby who I haven’t yet met.

Jonatan, my friends wrote back the next day. We just decided.
Jonatan: my anchor into a possible future intimacy.

In Jureša’s video installation, we come to know Mira through cropped and shadowy images, the rooms and landscapes in which she may have resided, and the narrator’s steady English-language voice-over.[2] The first channel of Jureša’s video tells the story of Mira’s parents, their relationship before her birth: their Jewish and Muslim backgrounds and lives in Bosnia before the Second World War; their meeting as Partisans. The second part of the video resumes at Mira’s birth: her childhood in Belgrade and move to Sarajevo, multiple marriages, the birth of her children; everything leading up to her death in 1990, “near Pakrac, where riots soon broke out heralding the beginning of war in Croatia and the fragmentation of the former Yugoslavia.” Details of personal biography intersect with sweeping moments in twentieth-century Southeast European history: the formation and dissolution of Yugoslavia, the destruction of thousands of lives in concentration camps. At every intersection, personal narrative and cultural history question each other: not, which is stronger or more important? but, how does one help us know the other more—or less—clearly?

In both intimacy and historical narrative, names can remind us of the awful tension between second- and third-person points of view. Jureša’s MIRA video embodies this tension. Most of the video is narrated in the third person, with Mira addressed as the second person “you.” In the second section of the video, the narrator reveals himself to be Mira’s son (unnamed). He claims for himself a gender identity, a generational identity, an emotional stake; an “I” with a clear relation to the “you.” The voice belongs to Tim Kerslake, an English language teacher who has lived in multiple countries, and whose speech reflects that: cool English inflections, seemingly familiar pronunciation of Serbian place-names. His elusive accent seems at once suspended from the events he describes, and very close to them. At once suspended and very close, Mira hovers between “you” and “she” (Mira).

Paired with written titles that periodically name a scene in blocky white type (“Bijeljina,” “Semlin Judenlager,” or “1990”), the style of voice-over narration recalls tropes of social documentary or historical fiction. To a European or American audience, these are culturally familiar forms for collectively remembering the events of the Holocaust. Within this space of commentary, the narrator’s speech conveys a sense of inherited history, and an accompanying knowingness. He explains matter-of-factly, “Death was constant and daily.” “You and your brother would rise together. Missing attention. Withheld.”

Mira’s narrative is tied up in the narratives of her country and century. At the same time, her narrative resists being swallowed by history, dwelling instead on specific, intimate details. Memory works in concert with images, and against them. In MIRA, images sometimes act as triggers to memory. (“Photographs can make strong breaks in the mind. My memories rely on photographs.”) A series of photographic images from personal and family archives bridge the different forms of Jureša’s project. These are treated as unstable documents, held alternately at an arm’s length and under a magnifying glass.

“Aware that the only picture you see is of your ancestors, here in their old homeland, entering your picture through the frame. The Pereras. You think of your father and his premature death. All of those stories of the family history stacked up and let loose like a busted reservoir wall. Here in this short moment. A flood.”

In concert with and against the photographic images of the video, Mira’s son’s narration not only dwells on but relies on intimate details. Without showing us what they looked like, he recalls his mother’s tiny feet, her dark smile, her love of theater. He recalls being unable to remember her ever having shouted. (“Do you even know how to?”)

Jureša’s work asks, what happens when this specific story about specific people intersects with the Holocaust, or with place-names like Jasenovac or Laborgrad? What happens to narrative, to language?

The audience who reacts to hearing the word Holocaust might not react in the same way to hearing Jasenovac, or Laborgrad. Jureša’s narrator helps fill in those gaps in associational memory, succinctly recounting the events that took place at these concentration camps. He recounts the events in his speech, using direct language, rather than direct images. He is not a witness, but a recipient of names.

At the same time, MIRA respects these differences in perspective, in memory. The work questions how much meaning we can attach to a name, or to a view into the woods, the place-name Jasenovac typed out, framing the image. Which is more evocative: the woods or the word? Which is more evocative, and for whom: Sajmište concentration camp or Semlin Judenlager?

Throughout MIRA, images also act as memorials, sometimes in indirect ways. A still shot in the sunlit woods marks the place where Serbian, Roma, and Jewish exiles once hid in fear. A flamenco dancer performs alone within filmic darkness, holding eye contact with the camera as she begins to move slowly to soulful Yugoslav music.[3] Throughout the video, the dancer acts as a second recipient of Mira’s story. After the narrator recounts some of the most violent episodes, the video cuts to her, standing up straight, eyes alert, head slightly cocked as if listening. Her image counters the archival quality of the Perera family photographs and the filmic images of nature. We cannot quite identify her as the narrator, Mira’s son, but her connection to Stojaković’s song and her attentiveness—the fact that she is the only live performer to appear on camera—suggests that they might somehow be allies. There is a tension between what can be shown, what can be suggested, and what can be described with language. The dancer too goes unnamed.

Memorialization occurs through absence, by looking at something else—not exactly remnants, but expressions of what is left behind. Just as a name can signify absence, the absence of a name can imply being so close as to slip beyond conscious narrative.

MIRA led Jureša to travel through the landscapes the work depicts. Her process of travel and research parallels the process the work takes up in its viewers, the movement between the named and un-nameable. MIRA internalizes the skepticism around naming the events of the Holocaust, and skepticism of over-cautiousness, as outlined by Giorgio Agamben, who writes that, “to say that Auschwitz is ‘unsayable’ or ‘incomprehensible’ is equivalent to euphemein, to adoring in silence, as one does with a god.”[4] Agamben does not linger here on the question of audience: in his writing, Auschwitz carries overwhelming, crushing associations. But the power of such a name also depends on who says it, how it is spoken, and to whom. Jureša both names events and provides ways around naming, identifying the power of a name to vary in meaning—even that of Mira, whose portrait is cut with alternate etymologies: 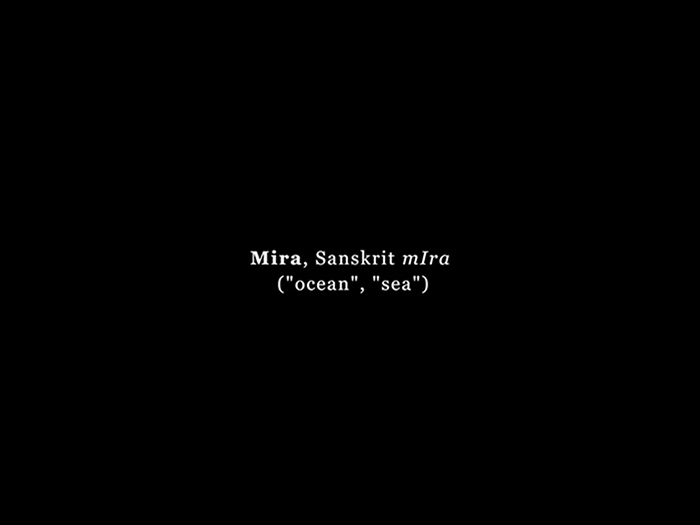 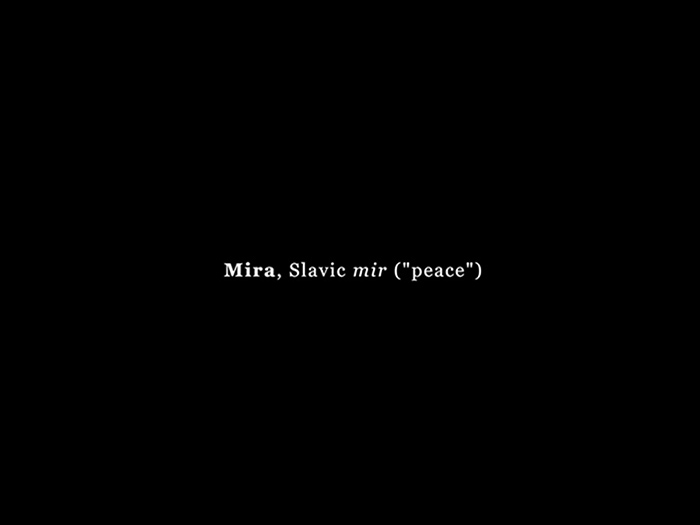 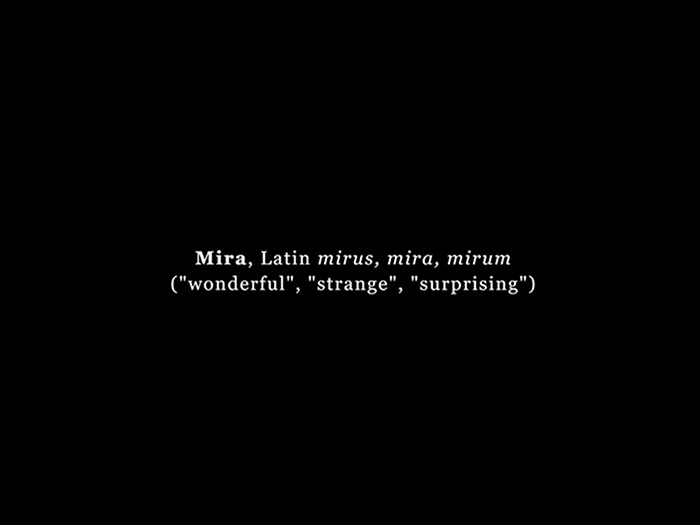 In her book The Argonauts, Maggie Nelson recalls an argument with her partner about the intimate power of names: does naming limit meaning by fixing individual perceptions in relation to knowledge; or is naming “kaleidoscopic,” in the way that words stretch the more they’re used, meanings doubling, splintering, rearranging themselves in time…? Nelson traces her thinking to Roland Barthes, who wrote:

“Gossip reduces the other to he/ she, and this reduction is intolerable to me. For me the other is neither he nor she; the other has only a name of his own, and her own name. The third-person pronoun is a wicked pronoun: it is the pronoun of the non-  person, it absents, it annuls.”[5]

Intimacy, Barthes argues, holds us so close that we find each other’s pronouns “intolerable.” Closeness is defined by the intolerability of absence, that we may become memories: “non-people.”

Thoughtfully and with a lot of care, Jureša brings together intimate and historical parameters of living with names. If names act as containers for what is left behind, they are also flexible containers, deeply held, withheld. The multiple meanings of Mira’s own name emphasize an openness of both perception and interpretation. A golden field, wind blowing through it. A lush waterfall. A family photograph. A soap opera. Mira (one etymology or another,) and photographs of the ocean. Columbus’s ocean: a vast signifier, pre-colonization, pregnant with possibility. Mira’s ocean: strange, rebellious.

[2] In a Skype conversation, Jureša identifies the power of English to perform as Esperanto.

[3] The performer dances to a song performed by Jadranka Stojaković, who is known for her gentle voice. Jureša: “Some still quarrel whether it was a Bosnian, Serbian, or Croatian song (it does sound like Bosnian Sevdalinka songs, but it is definitely the sound of Yugoslavia). It is a song about absence and longing.”